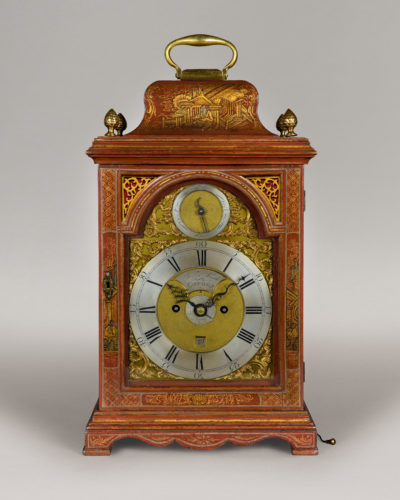 A good mid-18th century red lacquer bracket clock. The brass dial with subsidiary Strike/Silent in the arch. There is an alarm-setting disc mounted to the centre with a date aperture below. The twin fusee movement has a verge escapement. Date: circa 1750 Height: 20 in (51 cm) 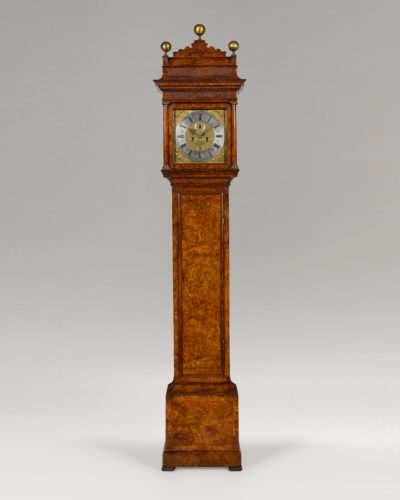 An exceptional Queen Anne period burr walnut longcase clock with square dial and caddy top by this famous maker. The case is veneered with figured walnut of excellent colour and patination. The pull-forward caddy top hood is flanked by turned, walnut veneered pillars with brass capitals. The original caddy top is surmounted by two gilt ball finials and a third which is mounted on a central block. The 12 inch square dial has an applied chapter ring with winged cherubs and foliate spandrels. The centre is finely matted with an applied seconds ring and an aperture to view the day of the month above VI. The blued steel pointers are finely pierced and the maker’s signature – Christopher Gould, London - is engraved on an oval reserve within the matted dial centre. The five pillar movement has rack striking with the hours sounded on a bell. As one would expect from a maker of Gould’s stature, the movement is excellent quality with chamfered cocks and thick plates. Date: circa 1710 Height: 100 in (254 cm) Width: 19 ½ in (49.5 cm) Depth: 10 ¼ in (26 cm) * Christopher Gould was made a Free Brother in The Clockmakers’ Company in April 1682. He was later appointed Beadle in 1713. He died in 1718 and examples of his work can be seen in many public collections including the British Museum. He was one of the finest makers of the period and his cases are on a par with those of Thomas Tompion and Daniel Quare. In fact, given the similarities, there is a strong probability that this case was made by the same cabinet maker as those of Tompion and Quare. 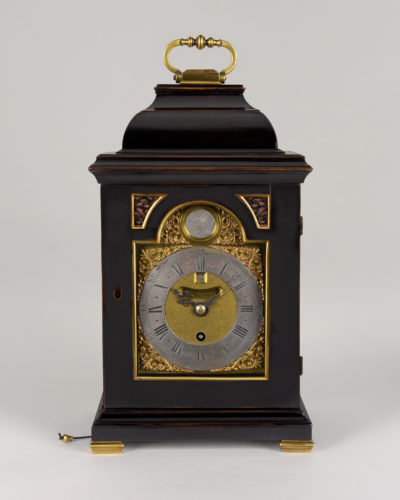 A good George II period ebonised pearwood bracket of small size, the 4 ¾ inch arched brass dial with inset datework below XII and a central dummy pendulum aperture. The 8-day timepiece movement has a restored verge escapement with pull hour and quarter repeatwork on 7 bells. Date: circa 1745 – 1750 Height: 13 ½ in (34.5 cm) excluding handle Width: 8 in (20.5 cm) Depth: 5 ½ in (14 cm) * John Ellicott was born in 1706 and established his business in Swithin's Alley, Royal Exchange in 1728. He was the inventor of a compensation pendulum and he developed the use of the cylinder escapement. Like his peer George Graham, he became a member of the Royal Society, for which he wrote several papers. He was appointed Clockmaker to the King and he designed the London Hospital clock. He died suddenly in 1772 and was succeeded by his son. His work can be found in museums and royal collections throughout the world.

A classic mahogany trunk dial wall clock by this talented but controversial Royal clockmaker. The 13 in. flat wooden white painted dial which retains its original brass heart shaped hands has a substantial square plated fusee movement with four spoke train and half dead beat escapement. The backplate is signed Vulliamy, London 1122, with typical backcock to support the heavy numbered brass bob and steel rod pendulum. The handsome well proportioned case, typical of Vulliamy’s cabinet workshop, has a drop trunk and is in beautifully patinated figured mahogany. The wooden dial retains its original ‘crackled’ painted surface, boldly turned mahogany surround and concave brass bezel. Date: circa 1835-1840 Height: 23 in (58.5 cm) Overall diameter: 15 ¾ in (40 cm) * This clock was made by Benjamin Lewis Vulliamy, the last generation member of the famous clockmaking dynasty. He was clockmaker to George III and the Prince Regent, later George IV. He died in 1854 ending the Royal Appointment held continuously by him and his forebears for 112 years.

A specialist dealer in 17th and 18th century English clocks and barometers since the 1980s. We have a beautiful gallery situated at the Notting Hill end of Kensington Church Street, where we show some of the finest timepieces by famous English clockmakers available on the market.